Premiere Screening of the film "Creation Explorers: Tracking the Flood" 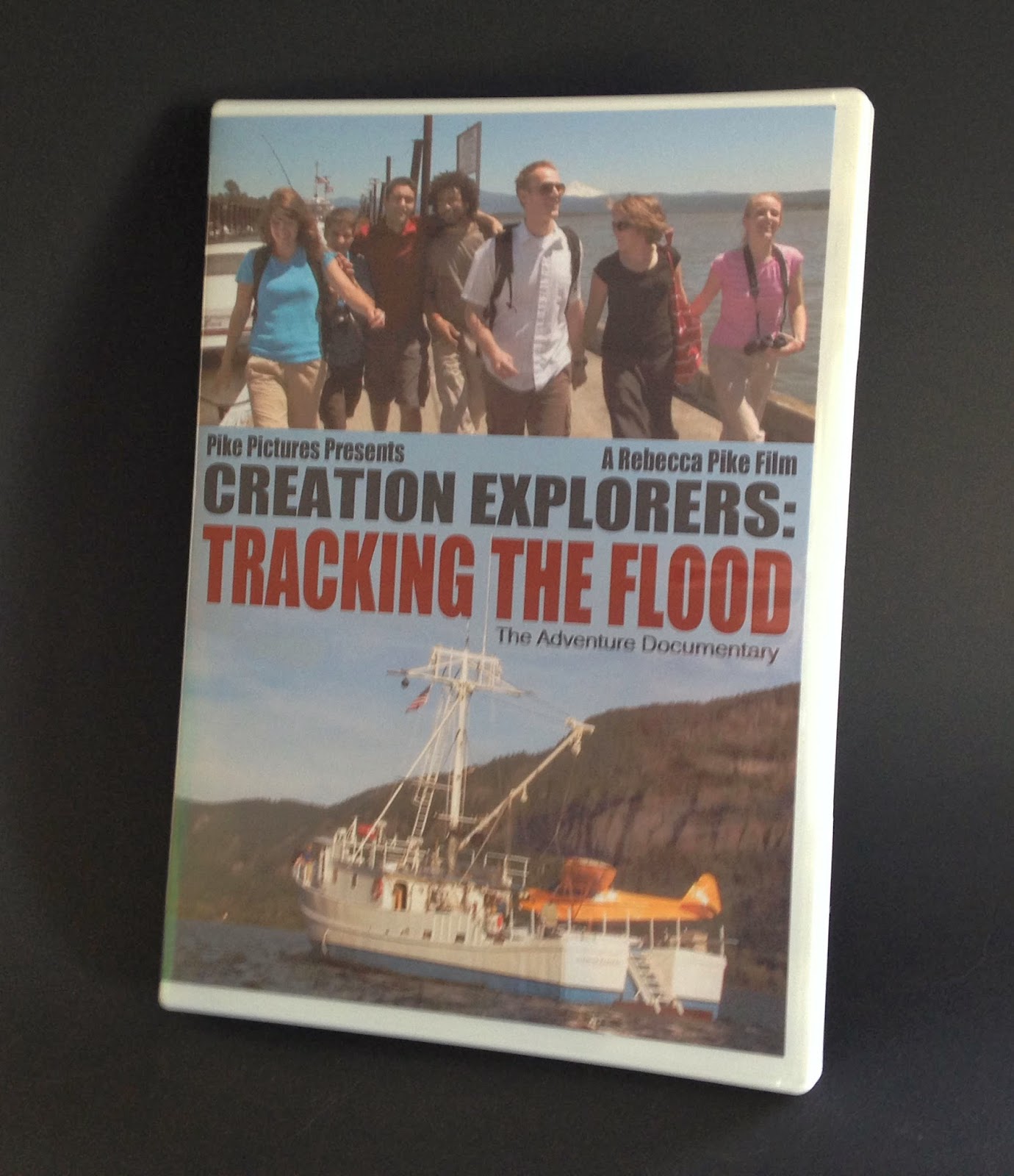 Premiere Screening of the film "Creation Explorers: Tracking the Flood"

Design Science Association hosts creation science meetings every third Saturday of every month. For April's DSA meeting, held at Greater Portland Bible, the "Creation Explorers: Tracking the Flood" film will be shown, followed by a presentation by Creation Encounter Field Trips introducing all the exciting trips they are offering this year.

Creation Encounter field trips were the inspiring force behind the film. The Creation Explorers went on several trips with Creation Encounter tours and they realized they needed to make a film about the hard evidences that support the Bible and its record of a global flood catastrophe.

Don't miss this event! It may change the your life. You might be inspired yourself!
Posted by FilmShooter at 1:56 PM No comments:

Nov. 2013 - Deadline for film completion: March 2014. To be released along side Russel Crow's NOAH film. The world will be thinking about the Biblical Flood!

Apr 13, 2012 - Continuing the editing process. We've been able to interview
so many prominent Creation Scientists for the film. Thank you Lord.

Oct 2009 - ICR (Institute for Creation Science) scientists shipped out with the Creation Explorers
for a dinner cruise after their F.A.S.T. Conference in Portland.
(F.A.S.T.= Flood Activated Sedimentation and Tectonics) 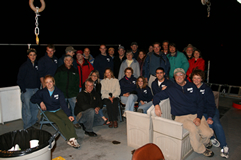 Aug 2008 - PRINCIPLE PHOTOGRAPHY under way!!!
May 2008 - Went with Creation Encounter (Creation Science field trips) to the Southwest to film the Grand Canyon, Bryce and Zion. Got lots of good footage.

Nov. 2007 - Editing studio burned to the ground. Will have to start from scratch.
Posted by FilmShooter at 1:50 PM No comments:

This summer we began filming scenes for our adventure/documentary! During July, Becki was able to get the Script close to being finished, so by August we began shooting. Our Scientist Friends have been helping us quite a bit to get the information correct and giving us their good opinions and ideas.

We've upgraded our film equipment with a Canon HDV camera (HX A1). Thank you Lord.

The Creation Explorers also have put in serious effort in learning how to speak in front of the camera and communicate the information. This is all such good experience.

For the winter, we've taken the Piper Cub off its floats and are doing maintenance work on the Boat. We'll continue shooting next Spring.

Thanks for all your prayers!
Posted by FilmShooter at 12:50 PM No comments:

We, the Creation Explorers, are a group of young people who, lead by John Pike, have taken an old retired fishing vessel and have transformed it into a Creation "Research"/ Recreational Vessel. We are using this mighty ship to make an adventure/documentary film that questions the authority and validity of the theories of Evolution and of "millions of years" Uniformitarianism. We want to show young people that they don't have to mindlessly accept the "theory as fact" approach to science, which teaches Evolution as scientific fact when it is actually far from it.
The whole universe was marvelously designed by an intelligent person. That person, the God of all creation, came to earth and revealed Himself to us. That person is Jesus Christ. He is the God of all and deserves to be glorified for what He has done and for what treasures He offers to all of mankind.
Posted by FilmShooter at 12:48 PM No comments:

The Creation Explorer: Tracking the Flood in the Columbia River Gorge 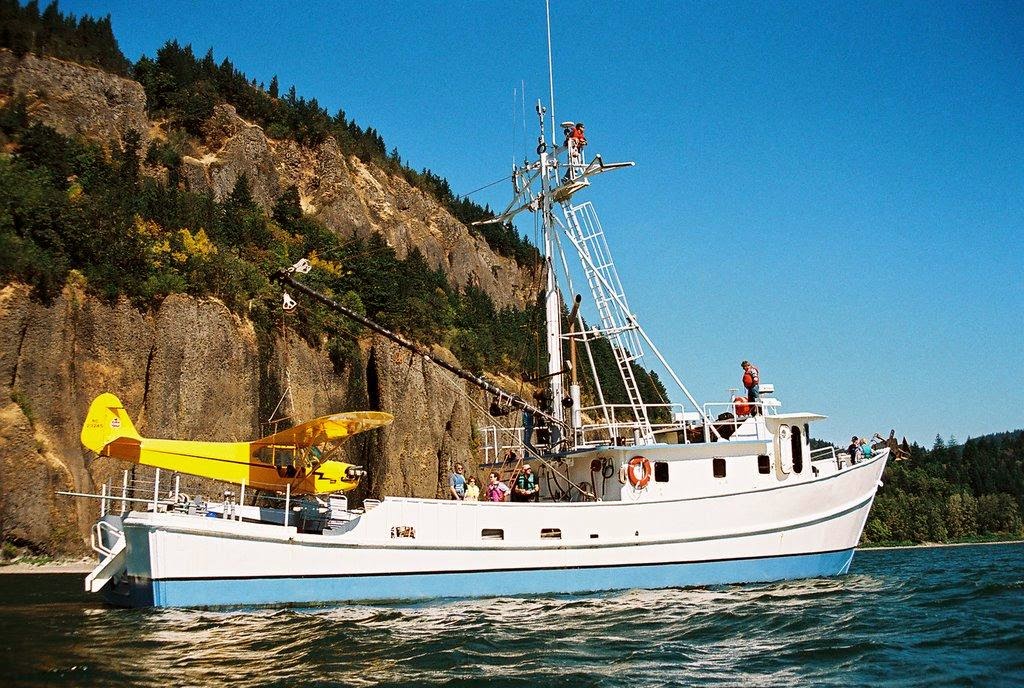 CREATION EXPLORER CRV-1Creation Recreational Vessel
This retired 85’fishing trawler was reclaimed by the Creation Explorers Club, located in Portalnd, Oregon. They are Christian youth who are devoted to understanding the mysteries of God’s creation and desire to give Him the glory. The 1939 Piper Cub ‘Sea Scout’ aircraft complements the research capabilities of the vessel.

The first assignment for these ‘Explorers’ was to study the geology of the Columbia River Gorge and film their observations. The geology in this area has a very significant past in that it was carved by huge flood waters. After the ice age, about 4,000 years ago, what is now Missoula, Montana, was then a huge lake dammed by a great ice flow. The dam broke and this massive lake emptied and blasted through central-eastern Washington. The waters followed the path of the Columbia River, carving much away rock in the Columbia River Gorge, and poured out across the whole Willamette Valley.

This geologic discovery of the 20th century is extremely significant to science and to the Creation-model because it defies the predominant theory used by ‘old age’ scientists to explain geology in non-catastrophic terms. It proved catastrophes have had an influence on geology and demonstrates the great possibility that a global flood, as recorded in the Bible, could easily have carved out the dramatic features we see across the earth
.
Posted by FilmShooter at 8:22 PM 1 comment:

BE A CREATION EXPLORER